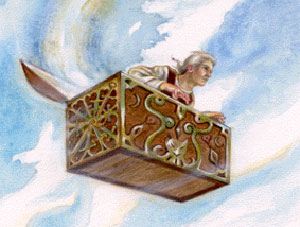 There was once a merchant who was so rich that he could have paved the whole street, and perhaps even a little side-street besides, with silver. But he did not do that; he knew another way of spending his money. If he spent a shilling he got back a florin-such an excellent merchant he was till he died.

Now his son inherited all this money. He lived very merrily; he went every night to the theatre, made paper kites out of five-pound notes, and played ducks and drakes with sovereigns instead of stones. In this way the money was likely to come soon to an end, and so it did.

At last he had nothing left but four shillings, and he had no clothes except a pair of slippers and an old dressing-gown.

His friends did not trouble themselves any more about him; they would not even walk down the street with him.

But one of them who was rather good-natured sent him an old trunk with the message, ‘Pack up!” That was all very well, but he had nothing to pack up, so he got into the trunk himself.

It was an enchanted trunk, for as soon as the lock was pressed it could fly. He pressed it, and away he flew in it up the chimney, high into the clouds, further and further away. But whenever the bottom gave a little creak he was in terror lest the trunk should go to pieces, for then he would have turned a dreadful somersault-just think of it!

In this way he arrived at the land of the Turks. He hid the trunk in a wood under some dry leaves, and then walked into the town. He could do that quite well, for all the Turks were dressed just as he was-in a dressing-gown and slippers.

He met a nurse with a little child.

‘Halloa! you Turkish nurse,’ said he, ‘what is that great castle there close to the town? The one with the windows so high up?’

‘The sultan’s daughter lives there,’ she replied. ‘It is prophesied that she will be very unlucky in her husband, and so no one is allowed to see her except when the sultan and sultana are by.’

‘Thank you,’ said the merchant’s son, and he went into the wood, sat himself in his trunk, flew on to the roof, and crept through the window into the princess’s room.

She was lying on the sofa asleep, and was so beautiful that the young merchant had to kiss her. Then she woke up and was very much frightened, but he said he was a Turkish god who had come through the air to see her, and that pleased her very much.

They sat close to each other, and he told her a story about her eyes. They were beautiful dark lakes in which her thoughts swam about like mermaids. And her forehead was a snowy mountain, grand and shining. These were lovely stories.

Then he asked the princess to marry him, and she said yes at once.

‘But you must come here on Saturday,’ she said, ‘for then the sultan and the sultana are coming to tea with me. They will be indeed proud that I receive the god of the Turks. But mind you have a really good story ready, for my parents like them immensely. My mother likes something rather moral and high-flown, and my father likes something merry to make him laugh.’

‘Yes, I shall only bring a fairy story for my dowry,’ said he, and so they parted. But the princess gave him a sabre set with gold pieces which he could use.

Then he flew away, bought himself a new dressing-gown, and sat down in the wood and began to make up a story, for it had to be ready by Saturday, and that was no easy matter.

When he had it ready it was Saturday.

The sultan, the sultana, and the whole court were at tea with the princess.

He was most graciously received.

‘Will you tell us a story?’ said the sultana; ‘one that is thoughtful and instructive?’

‘But something that we can laugh at,’ said the sultan.

‘Oh, certainly,’ he replied, and began: ‘Now, listen attentively. There was once a box of matches which lay between a tinder-box and an old iron pot, and they told the story of their youth.

‘”We used to be on the green fir-boughs. Every morning and evening we had diamond-tea, which was the dew, and the whole day long we had sunshine, and the little birds used to tell us stories. We were very rich, because the other trees only dressed in summer, but we had green dresses in summer and in winter. Then the woodcutter came, and our family was split up. We have now the task of making light for the lowest people. That is why we grand people are in the kitchen.”

‘”My fate was quite different,” said the iron pot, near which the matches lay.

‘”Since I came into the world I have been many times scoured, and have cooked much. My only pleasure is to have a good chat with my companions when I am lying nice and clean in my place after dinner.”

‘”Now you are talking too fast,” spluttered the fire.

‘”Yes, let us decide who is the grandest!” said the matches.

‘”No, I don’t like talking about myself,” said the pot.

‘”Let us arrange an evening’s entertainment. I will tell the story of my life.

‘”On the Baltic by the Danish shore-”

‘What a beautiful beginning!” said all the plates. «That’s a story that will please us all.”

‘And the end was just as good as the beginning. All the plates clattered for joy.

‘”Now I will dance,” said the tongs, and she danced. Oh! how high she could kick!

‘The old chair-cover in the corner split when he saw her.

‘The urn would have sung but she said she had a cold; she could not sing unless she boiled.

‘In the window was an old quill pen. There was nothing remarkable about her except that she had been dipped too deeply into the ink. But she was very proud of that.

‘”If the urn will not sing,” said she, «outside the door hangs a nightingale in a cage who will sing.”

‘”I don’t think it’s proper,” said the kettle, «that such a foreign bird should be heard.”

‘Suddenly the door opened and the maid came in. Everyone was quite quiet. There was not a sound. But each pot knew what he might have done, and how grand he was.

‘The maid took the matches and lit the fire with them. How they spluttered and flamed, to be sure! «Now everyone can see,” they thought, «that we are the grandest! How we sparkle! What a light-”

‘But here they were burnt out.’

‘That was a delightful story!’ said the sultana. ‘I quite feel myself in the kitchen with the matches. Yes, now you shall marry our daughter.’

‘Yes, indeed,’ said the sultan, ‘you shall marry our daughter on Monday.’ And they treated the young man as one of the family.

The wedding was arranged, and the night before the whole town was illuminated.

Biscuits and gingerbreads were thrown among the people, the street boys stood on tiptoe crying hurrahs and whistling through their fingers. It was all splendid.

‘Now I must also give them a treat,’ thought the merchant’s son. And so he bought rockets, crackers, and all the kinds of fireworks you can think of, put them in his trunk, and flew up with them into the air.

Whirr-r-r, how they fizzed and blazed!

All the Turks jumped so high that their slippers flew above their heads; such a splendid glitter they had never seen before.

Now they could quite well understand that it was the god of the Turks himself who was to marry the princess.

As soon as the young merchant came down again into the wood with his trunk he thought, ‘Now I will just go into the town to see how the show has taken.’

And it was quite natural that he should want to do this.

Oh! what stories the people had to tell!

Each one whom he asked had seen it differently, but they had all found it beautiful.

‘I saw the Turkish god himself,’ said one. ‘He had eyes like glittering stars, and a beard like foaming water.’

‘He flew away in a cloak of fire,’ said another. They were splendid things that he heard, and the next day was to be his wedding day.

Then he went back into the wood to sit in his trunk; but what had become of it? The trunk had been burnt. A spark of the fireworks had set it alight, and the trunk was in ashes. He could no longer fly, and could never reach his bride.

She stood the whole day long on the roof and waited; perhaps she is waiting there still.

But he wandered through the world and told stories; though they are not so merry as the one he told about the matches.