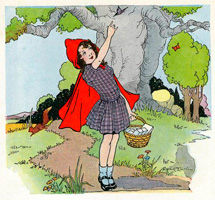 Many years ago there lived a dear little girl who was beloved by every one who knew her; but her grand-mother was so very fond of her that she never felt she could think and do enough to please this dear grand-daughter, and she presented the little girl with a red silk cap, which suited her so well, that she would never wear anything else, and so was called Little Red-Cap.

One day Red-Cap’s mother said to her, «Come, Red-Cap, here is a nice piece of meat, and a bottle of wine: take these to your grandmother; she is weak and ailing, and they will do her good. Be there before she gets up; go quietly and carefully.»

The grandmother lived far away in the wood, a long walk from the village, and as Little Red-Cap came among the trees she met a Wolf; but she did not know what a wicked animal it was, and so she was not at all frightened. «Good morning, Little Red-Cap,» he said.

«Where are you going so early, Little Red-Cap?»

«To my grandmother’s,» she answered.

«And what are you carrying in that basket?» 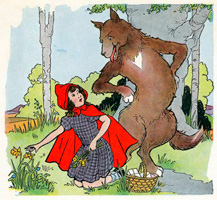 «Some wine and meat,» she replied. «We baked the meat yesterday, so that grandmother, who is very weak, might have a nice strengthening meal.»

«And where does your grandmother live?» asked the Wolf.

«Oh, quite twenty minutes walk further in the forest. The cottage stands under three great oak trees; and close by are some nut bushes, by which you will at once know it.»

The Wolf was thinking to himself, «She is a nice tender thing, and will taste better than the old woman; I must act cleverly, that I may make a meal of both.»

Presently he came up again to Little Red-Cap, and said, «Just look at the beautiful flowers which grow around you; why do you not look about you? I believe you don’t hear how sweetly the birds are singing. You walk as if you were going to school; see how cheerful everything is about you in the forest.»

And Little Red-Cap opened her eyes; and when she saw how the sunbeams glanced and danced through the trees, and what bright flowers were blooming in her path, she thought, «If I take my grandmother a fresh nosegay, she will be very much pleased; and it is so very early that I can, even then, get there in good time;» and running into the forest, she looked about for flowers. But when she had once begun she did not know how to leave off, and kept going deeper and deeper amongst the trees looking for some still more beautiful flower. The Wolf, however, ran straight to the house of the old grandmother, and knocked at the door. 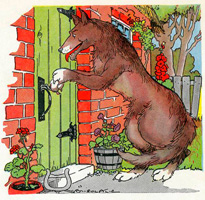 «Who’s there?» asked the old lady.

«Only Little Red-Cap, bringing you some meat and wine; please open the door,» answered the Wolf. «Lift up the latch,» cried the grandmother; «I am much too ill to get up myself.»

So the Wolf lifted the latch, and the door flew open; and without a word, he jumped on to the bed, and gobbled up the poor old lady. Then he put on her clothes, and tied her night-cap over his head; got into the bed, and drew the blankets over him. All this time Red-Cap was gathering flowers; and when she had picked as many as she could carry, she thought of her grandmother, and hurried to the cottage. She wondered greatly to find the door open; and when she got into the room, she began to feel very ill, and exclaimed, «How sad I feel! I wish I had not come to-day.»
Then she said, «Good morning,» but received no reply; so she went up to the bed, and drew back the curtains, and there lay her grandmother, as she imagined, with the cap drawn half over her eyes, and looking very fierce.

«Oh, grandmother, what great ears you have!» she said.

«All the better to hear you with,» was the reply.

«And what great eyes you have!»

«All the better to see you with.»

«And what great hands you have!»

«All the better to touch you with.»

«But, grandmother, what very great teeth you have!»

«All the better to eat you with;» and hardly were the words spoken when the Wolf made a jump out of bed, and swallowed up poor Little Red-Cap also.

As soon as the Wolf had thus satisfied his hunger, he laid himself down again on the bed, and went to sleep and snored very loudly. A huntsman passing by overheard him, and said, «How loudly that old woman snores! I must see if anything is the matter.»

So he went into the cottage; and when he came to the bed, he saw the Wolf sleeping in it. «What! are you here, you old rascal? I have been looking for you,» exclaimed he; and taking up his gun, he shot the old Wolf through the head. 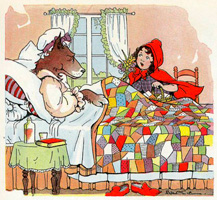 But it is also said that the story ends in a different manner; for that one day, when Red-Cap was taking some presents to her grandmother, a Wolf met her, and wanted to mislead her; but she went straight on, and told her grandmother that she had met a Wolf, who said good day, and who looked so hungrily out of his great eyes, as if he would have eaten her up had she not been on the high-road.

So her grandmother said, «We will shut the door, and then he cannot get in.» Soon after, up came the Wolf, who tapped, and exclaimed, «I am Little Red-Cap, grandmother; I have some roast meat for you.» But they kept quite quiet, and did not open the door; so the Wolf, after looking several times round the house, at last jumped on the roof, thinking to wait till Red-Cap went home in the evening, and then to creep after her and eat her in the darkness. The old woman, however, saw what the villain intended. There stood before the door a large stone trough, and she said to Little Red-Cap, «Take this bucket, dear: yesterday I boiled some meat in this water, now pour it into the stone trough.» Then the Wolf sniffed the smell of the meat, and his mouth watered, and he wished very much to taste. At last he stretched his neck too far over, so that he lost his balance, and fell down from the roof, right into the great trough below, and there he was drowned. 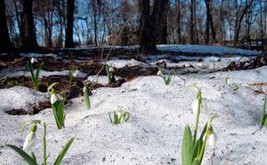 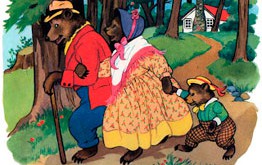